Knowledge is power. This is perhaps true. What about “knowledge and data are power?” That’s irrefutable. It is known in today’s connected world that the most valuable asset is Data. This service providing IP to geological data ipstack.com, is a gold mine not only for developers, but publishers and even enthusiasts,

This service providing IP of real-time geological data ipstack.com is used by SMBs, developers and large corporations over the world in a broad range of implementations. 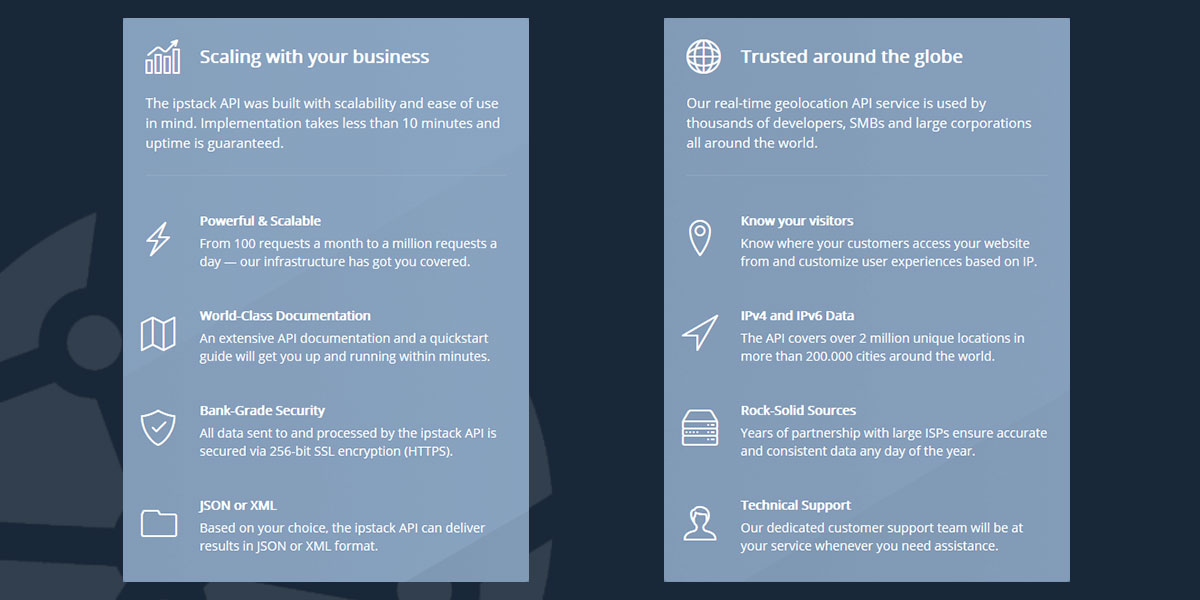 Over 2 million unique locations in more than 200,000 cities are covered by this API and

An up-to-date data are provided based on steady sources.

The API of ipstack.com has been created to be scalable and easy to use. So ipstack.com can be used regardless of the thousands of requests you need per day. As a matter of fact, every month, the API handles about 3 billion requests per day.

The ipstack.com database and API is composed & coordinated with an extended network of ISPs and is uninterruptedly updated with data on new or existing IP ranges. In fact, ipstack.com receives around 24 updates per day, making it secure and significant. 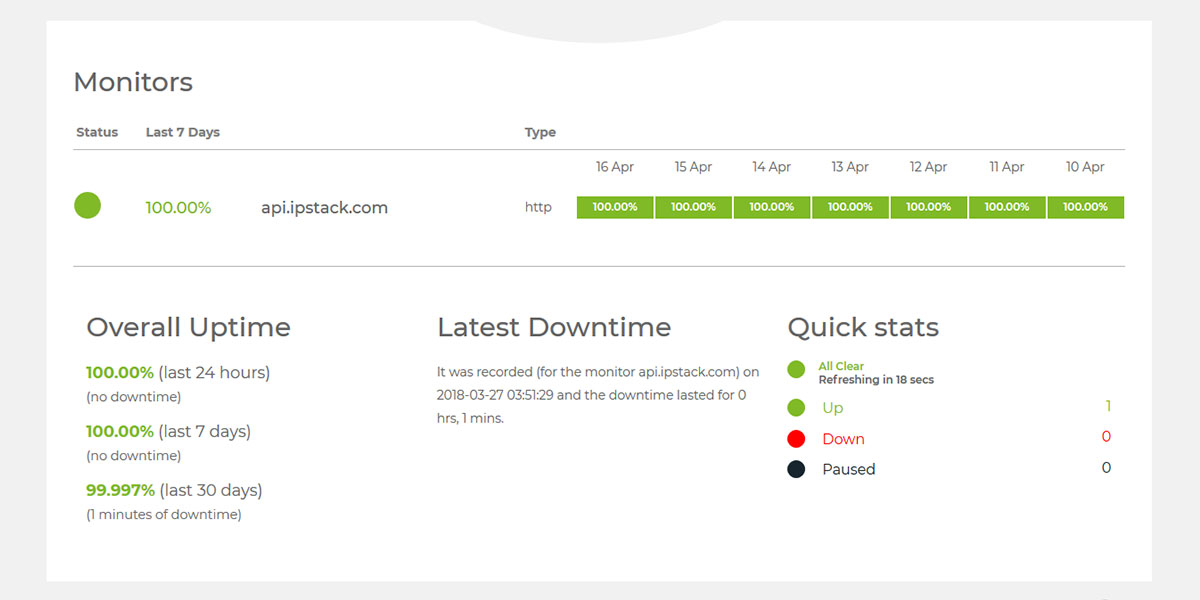 The API is scalable and impervious. It has been designed to avoid being congested, and the infrastructure behind ipstack.com is based on a modular platform which can be enlarged to suit spikes in requests without degeneration of service. And all of this is backed-up by an outstanding 99.99% uptime for the last year.

The API has the ability & efficiency to deliver any geodata you would expect. The three endpoints — Standard IP Lookup, Bulk IP Lookup and Requester IP Lookup — offer granular control over the data you need to extract from the API.

In addition to the compulsory IP Address and access_key parameters, you can attach to your request parameters such as hostname, language, callback, security, or output. Each parameter will return a specific value. For example, the output parameter will set the output format to either JSON or XML.

The API response will display the IP, the type of the IP, location data including continent, country code, city or ZIP code , country name, and region code. Also, the API will provide, geoname ID, language, geographical coordinates, country flag including the country flag emoji, detailed data on the time zone, ISP provider and currency. The bulk option works the same, but you can specify multiple targets.

If you request a response in XML the response will be  <batch></batch> and contain one <result></result> with its respective index number per requested IP address/domain.

If you request a response in JSON, the API will provide one IP data object per requested address. The third endpoint, the Requester IP Lookup, has the same parameters as the two other endpoints and can both be generated as a response for the current IP address from where the request is made.

The response can be requested to be delivered in JSON or XML. For JSON you’ll append & output = json to your query or & output = xml for XML.

It is possible to limit the response to specific objects when all the information provided by the API is not needed.

It is quite imperative to have a look at ipstacks.com extended documentation as there are varieties of options, where all possible implementation of the API can be found, alongside its options, integrations and features.

What Can You Do With the ipstack.com API?

There are a lot of use case scenarios for using the API. For example, I am using the service for two primary situations: usability and security. However, ipstack.com proved to be essential for a somewhat complicated project that I want to forget about it.

It was a state-supported project, intended to give online access to medical and social services. For anyone who has been part of a state project, will realize that the measure of technical illiteracy and bureaucracy can turn out to be a critical bottleneck. The specialized necessities were a wreck of legal wording and technical utopia. A portion of the treats were contradictory requirements, old technological stages, and some extreme security dangers.

The possibility of the project was to plan and have designed a web-based platform, interconnected with existing tools, which would permit simple access through a site and a mobile application to a set of social services

In accordance to the requirements “any citizen ought to have immediate, dependable, and full access to the service” however, “the service ought to be accessible only within the country.” Our legal team had a great deal of long nights to find a baseline on which we should work.

In an outstanding effort, we’ve figured out how to accomplish an ideal harmony between the requirements, the legal framework and the technical implementation with one major exemption. While our legal team figured out how to plan a feasible idea that would fit in with every current direction on privacy and security of data, we have neglected to persuade anybody outside the fringes to acknowledge our solution. 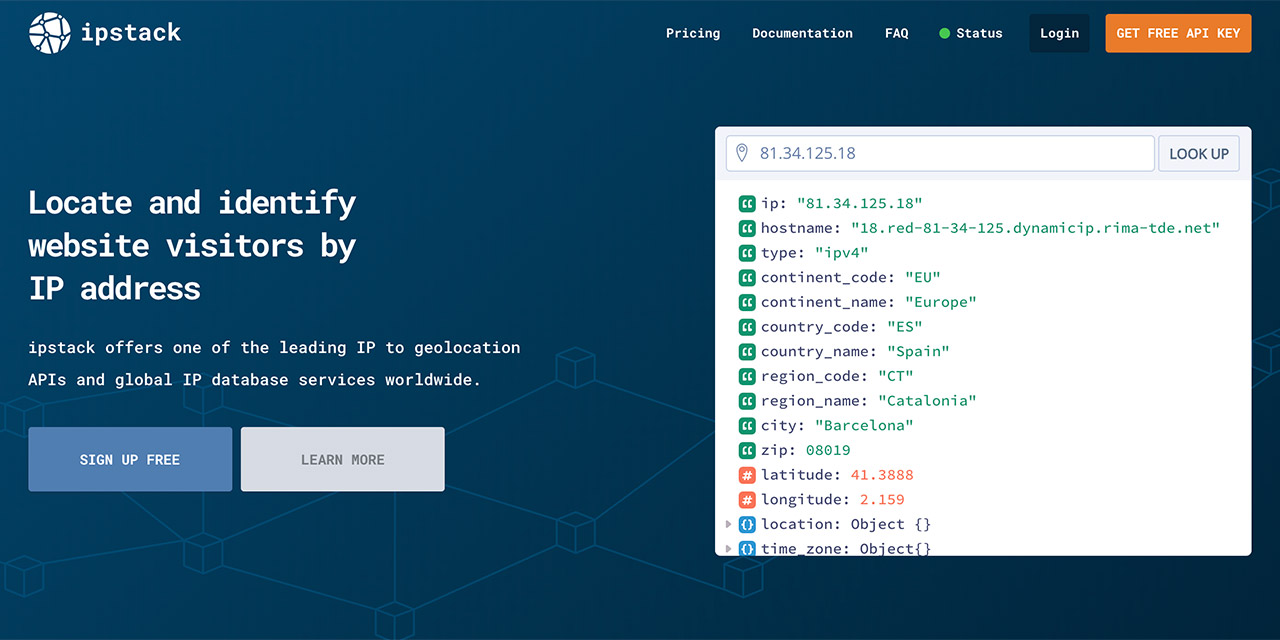 In this way, there was a need to block anyone outside the borders from accessing the app. Also, this was done with ipstack.com’s API. A couple of lines of code, and we wound up with an exquisite module that did the trick.

ipstack.com API can be used for different goals, as I have utilized ipstacks.cpm for different objectives. Everyone realizes that the more drawn out a user takes to complete a form, the greater possibility of abandonment. The API assisted me to autocomplete location, compute shipping costs, currency or language fields, implement calculations, access the estimated delivery time, and more.

Obviously, there are other solutions to do that, yet ipstacks.com is the most productive strategy. With reusable code pieces, can actualize the API in a breeze

Additionally, ipstacks.com enabled me to filter bad IPs, denial of service attacks, spammers and other threats from reaching my projects. Of course, IP filtering is not a panacea, however ipstack.com API is any superhero’s sidekick. Also, with such a precise and reliable sidekick, saving the day (or the project), is so much easier.

Getting started with ipstack.com is simple. After you register for a free API access key, you’ll have the capacity to test the service in less than 10 minutes. This is precisely how much time you’ll need to set up a test environment. A quick start tool is accessible for both free and premium users and will exhibit the full power of the API with a few clicks.

Ipstack.com accompanies a complementary plan which will enable you to test the API on your website or application. Premium designs begins at $9.99 every month and incorporate SSL encryption, extra API features including bulk or batch support, and extended support.

Ipstacks.com is accessible on a subscription-based model with the goal that you can choose the billing frequency in view of your needs. In the case where you’ll select a yearly plan, you’ll additionally get a 20% discount. Payments can be made via credit cards, PayPal or, for enterprises, via standard bank transfer. By default, ipstack.com guarantees 2,000,000 API requests per month, which is all that could be possibly be needed for most. Nonetheless, in the event that you have to broaden the number of requests, the ipstacks.com team will be glad to customize your instance to suit your necessities.

In the event that you’ll surpass your API request volume, you should know that you have a 20% safety net to adjust operations. Just remember, geolocation is a sensible topic. Ipstack.com is a powerful and capable tool, however its only a tool. It’s dependent upon you to discover the line that separates a fantastic user experience from abuse. It’s all about privacy by design. Power is nothing without knowledge.